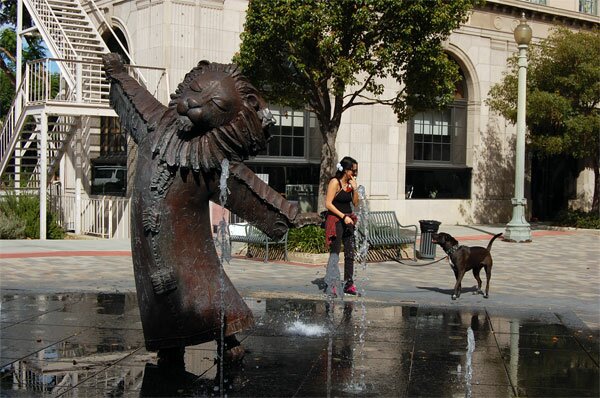 Water, a Lion, and Culver City

An incredibly beautiful monument of art that pleases and surprises not only children, but also adults. Among students of architectural universities, the bronze fountain is the most common topic for a master thesis.

Commissioned by the Culver City Redevelopment Agency in 2004, The Lion’s Fountain, located in the Town Plaza, is a favorite location for locals and tourists alike. Many a summer day, you can find children playing in the 40 animated water jets, cooling off from the hot California sun, which is what artist Douglas Olmsted Freeman intended.

Standing eight feet tall, the bronze Lion’s Fountain was inspired by Culver City’s film studios lions, the MGM’s Leo the Lion and the Wizard of Oz’s Cowardly Lion. The Lion’s Fountain has become a focal point of Town Plaza, delighting visitors with its carefree demeanor and dancing water jets.

The day I happened to be in Culver City, I happened upon a dog playing in the fountain. He tried several times to venture closer to the Lion, but each time the water shot up, he barked, and backed off. Not sure of what would happen next, he sheepishly approached, only to be startled again.

It was fun to watch.