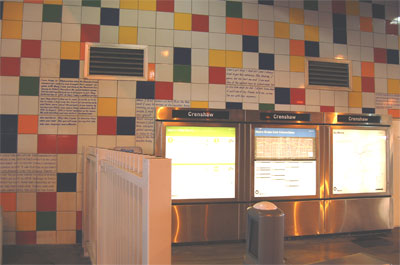 On Friday, after completing my work in the letter of recommendation writing service at https://elitewritings.com/buy-a-letter-of-recommendation.html, took LA’s Crenshaw/I-105 Metro Station, aka as the “Green Line,” going west.

The last time I took the Green Line, I was traveling to Long Beach. But today, I’m heading to downtown Los Angeles via the “Silverline.” If you’re ever in Inglewood, the Green Line and its connection is one of the best ways to get there.

The Crenshaw/I-105 Metro Station includes a 500 space parking lot, which on this particular weekday was half full. During my foray, I took advantage of their services and parked my car there and headed to the platform. BTW, there’s no charge for parking.

Entitled, “Crenshaw Stories,” the artwork gracing the walls of the station are the brain child of Buzz Spector, who until recently lived in the Mt. Washington area of Los Angeles County.

When he thought about public transit Spector said:

The station’s patrons include a diverse ethnic and cultural population and corroborate Crenshaw’s Stories.

The neighborhood’s stories include Spanish, Korean, Japanese, Chinese, Thai, Arabic, Russian and Tagalog, among others. In total, 72 stories are hand-painted onto tile and interspersed with color squares at the entrance to this Metro Stop.

Be sure to see it in person and read a few of the stories. That way, our differences are lessened and our community becomes a beloved glimpse into other people’s lives which comprise the great melting pot called Los Angeles.